The integration of electronic functions like switches, LEDs and sensors, into arbitrarily shaped three-dimensional surfaces enables a multitude of novel product designs and applications. Typical target applications can be found in the car interior, consumer and household electronics, but also industrial appliances.

In order to efficiently fabricate three-dimensional free formed electronics, established technologies are being used extensively throughout the process chain. The main feature developed at Fraunhofer IZM is the fabrication of a “formable” two-dimensional printed circuit board on a rigid carrier followed by conventional assembly of components.

Only in the very last fabrication step, the whole electronic systems is formed into its final shape by a thermoforming process. The dielectric carrier of the systems is a thermoplastic material e.g. Polycarbonate or Polyurethane or blends of both materials.

Since the (copper) conductor tracks undergo considerable extensions during the forming process they are typically designed as meanders, like in stretchable electronic systems 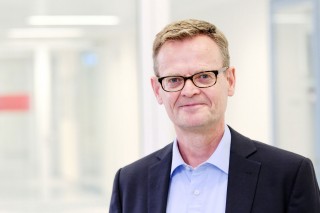