To examine the smallest units, i.e. atoms and molecules, researchers need the appropriate equipment. The sensor modules of the radiation-type pixel detectors are built at Fraunhofer IZM. These high-resolution X-ray cameras aid a variety of advanced discoveries in medicine, biology, and chemistry. Most recently, for example, the analysis using the detector allowed a key enzyme for SARS-CoV-2 research to be investigated.

A diatomic molecule is about 10ˉ10 meters or 0.1 nanometers in size. Even with an extreme-magnification scanning electron microscope, at most only the outlines of these tiny units can be made out. Nevertheless, to be able to analyze atomic structures and compounds other devices are used in research, such as the linear free-electron laser at the SLAC National Accelerator Center,  which generates especially short-wave and high-energy X-rays.

Atoms and molecules, however, are not studied solely as an end in themselves: X-ray diffraction, i.e. the diffraction of X-rays, is used to investigate the structure of molecules and crystals and to draw conclusions about the distribution of electrons. These conclusions can then be used to simulate the arrangement of  molecules and to find potential binding sites.

The significance of protein analysis has so far been weakened by the fact that it had to be performed at temperatures below -150 °C. Researchers at the Fraunhofer Institute for Reliability and Microintegration IZM have now built detector modules made of silicon that can be used to transfer medicinal operating principles to samples at body temperature. This increases the analytic precision and is a  prerequisite for the development of tailor-made drugs based on artificial proteins.

The Fraunhofer researchers' detector modules have yet another advantage: They are radiation-resistant and so withstand the high-energy X-rays generated in the free-electron laser, which would otherwise damage the pixel detector.

Concretely, the structure is as follows: The Berlin researchers receive two types of semiconductor wafers from SLAC with which to build the detector modules: silicon sensors and electronic chips for evaluating the signals. On the wafers they galvanically create the solder contact points, so-called bumps, and then separate the highly sensitive wafers into individual silicon chips. During module assembly, one sensor chip is electrically connected  to four electronic readout chips. The aim is to cover as much detection area as possible with one sensor. Fraunhofer IZM's hardware experts are thus realizing the core components of the final detector, which is about the size of a saucer. The detector, called ePix10k2M, uses a total of 16 modules with a resolution of 352 by 384 pixels, resulting in an active area  of over 2 megapixels.

The detector at SLAC can be used by a wide variety of research teams from all over the world. Group leader Thomas Fritzsch is pleased that "our abstract activities are in turn finding applications related to everyday topics". In a particularly important project, an international research team used the pixel detector to investigate two so-called apoproteins, which are considered to be a weak point of the coronavirus. On this basis, existing drugs for the treatment of Severe Acute Respiratory Syndrome SARS-CoV-2 can be redesigned or new agents can be developed.

Since the researchers at Fraunhofer IZM are among the few experts capable of producing such detector modules of the required quality, they have already been asked to build more modules, since  even the radiation-type detector modules must be replaced at regular intervals. 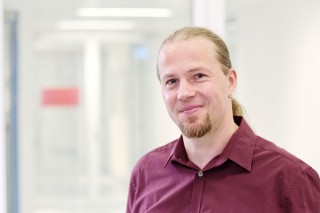