Fiber interconnection strategies for photonic integrated circuits (PICs) are usually developed using adhesives. However, this connection technique can lead to optical degradation in the long term and thus to high optical transmission losses, which are fatal in critical applications such as medical technology and the life sciences. As part of the “PICWeld” Eurostars project, Fraunhofer IZM researchers, working with their partners LioniX International BV, Phix Photonics Assembly and ficonTEC Service GmbH, have developed an adhesive-free, space-saving and robust laser welding process for fixing optical fibers to PICs. Integrating the process into an automated alignment system has proven its industrial maturity, making the glass-glass joining technique extremely attractive for commercial use.

It has long been known that biochemical processes, ranging from organ function to temperature regulation and hormone production, are influenced significantly by light. Research around light and the body has now advanced considerably and newer disciplines such as life sciences and biophotonics are addressing issues at the intersection between the natural sciences and medicine. High-precision, complex measurements can thus be used to obtain information about how light interacts with matter, by studying the structure of cells and tissues relevant to cancer for example.

But gaining insight into these innermost biological secrets is no easy undertaking: Recently, miniaturized systems based on PICs with highly stable fiber connections have been proposed as a way of understanding the role of visible light in biological processes. This is precisely where the Fraunhofer Institute for Reliability and Microintegration IZM came in with the research project “PICWeld” by developing a completely new laser welding process that can be used to attach optical fibers directly to PICs based on fused silica glass substrates. With the help of its partner ficonTEC Service GmbH, this process was implemented in an automated system that offers high reproducibility and scalability.

The research team led by Dr. Alethea Vanessa Zamora Gómez set itself the task of developing glass-glass joints that are simpler, more robust and more durable. Such connections are already used in the world of specialist optics, but conventional solutions have a significant drawback: In most cases, the discrete optical components are connected by an adhesive. The softness of the adhesive can cause the position of the component to change over time, and it also creates an interference point between the two layers of glass, which can lead to signal attenuation and become brittle as the adhesive ages. Long-term stability is therefore often critical. To circumvent these disadvantages of the joining technique, the researchers have developed a process of CO2 laser welding, creating a direct, thermally robust and transparent glass-glass joint for the first time.

But in order to go beyond experimental laser welding for reliable fused silica glass joints and bring the technology a step closer to industrialization and high scalability, an entirely new automated process system has been developed and manufactured.

The resulting system enables an adhesive-free interface and highly efficient coupling of welded-fibers PICs which include integrated waveguides. But before the connections were ready for application, the researchers had to overcome a number of technological challenges. Since the glass fibers and the substrates have different volumes, the heat capacities of the two parts to be joined are also unequal. This discrepancy results in very different heating and cooling behavior, which can lead, for example, to deformation and cracks during cooling. The solution of the photonics experts was to preheat the substrate evenly by means of a separate, individually adjustable laser, so that the melting phase of the fiber and the substrate is achieved simultaneously.

The system, which is equipped with thermal process monitoring up to 1300 °C, a positioning system accurate to 1 µm, image recognition processes and control software, was used to weld its first joints in the course of the project, allowing its functionality to be tested and initial process-oriented measurements to be taken.

Immediately after completion of PICWeld in 2021, the first follow-up projects were launched, in which the new technology was used for fiber coupling of collimators, waveguide chips and multi-lens arrays. “With our CO2 laser welding system, we have expanded the process behind the existing principle: The high automation potential in particular allows customers to use PICs with maximum coupling efficiency. Industrial integration means a leap forward for the areas in which biophotonics can be applied, but also for quantum communication and high-performance photonics,” explains the project manager at Fraunhofer IZM, Dr. Alethea Vanessa Zamora Gómez.

Fraunhofer IZM’s contribution to PICWeld was funded by the German Federal Ministry of Education and Research (BMBF) under the funding code: 01QE1744C.  It is part of the Eurostars program (11324), under which collaboration has taken place with Lionix International BV, Phix Photonics Assembly and ficonTEC Service GmbH.

Interview with Vanessa Zamora about the development of a new laser welding process. Learn more why this could be something of a revolution for attaching optical fibers to PiC.

Get informed by email about technical news and events 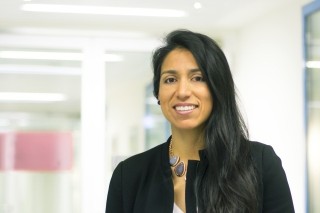