Close cooperation between the Optical Interconnection Technology working group and its industrial partners Eagleyard and FISBA Photonics has led to the successful conclusion of the publicly funded ProFIT development project MEMo. The aim of the project was to develop a new type of automated assembly concept to couple a multiemitter laser-chip module to an optical fi ber with a core diameter of less than 100 µm, for example for medical applications at a wavelength of 1470 nm, and with optical powers of up to typically 10 W.

Fraunhofer IZM’s main task was to develop the setup and adjustment processes of the special micro-optics needed for laser beam formation and effi cient fi ber coupling on the optical bench within the laser module. The processes are executed on a specially enhanced industrial active alignment machine, promising very good usability of the results. Active alignment means, on the one hand, that the laser chip is operated at full power with this laser module setup. On the other hand, during the sequential assembly of the total of four micro-optics needed for beam formation, the current adjustment status is monitored using a high-resolution infrared camera and is converted into fast, precise control signals for a fine-tuning actuator. This actuator can move and turn the lens it is holding through six degrees of spatial freedom at sub-micrometer levels of precision, or a few arc seconds, respectively, which is what is required for optical adjustment within the module.

The project also developed a setup concept in which both the micro-optic bench to be equipped, as well as the holding tools on the fi ne-tuning actuators, are manufactured from laser-cut stacked glass. Laser structuring available at Fraunhofer IZM makes this approach highly adaptable and quick in turn-around. Additional complex optical setups that use the thin-glass concept are being planned; there are also plans to use structured metallization to embed (opto-)electronic components directly. 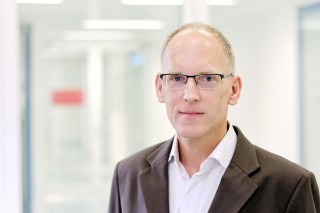